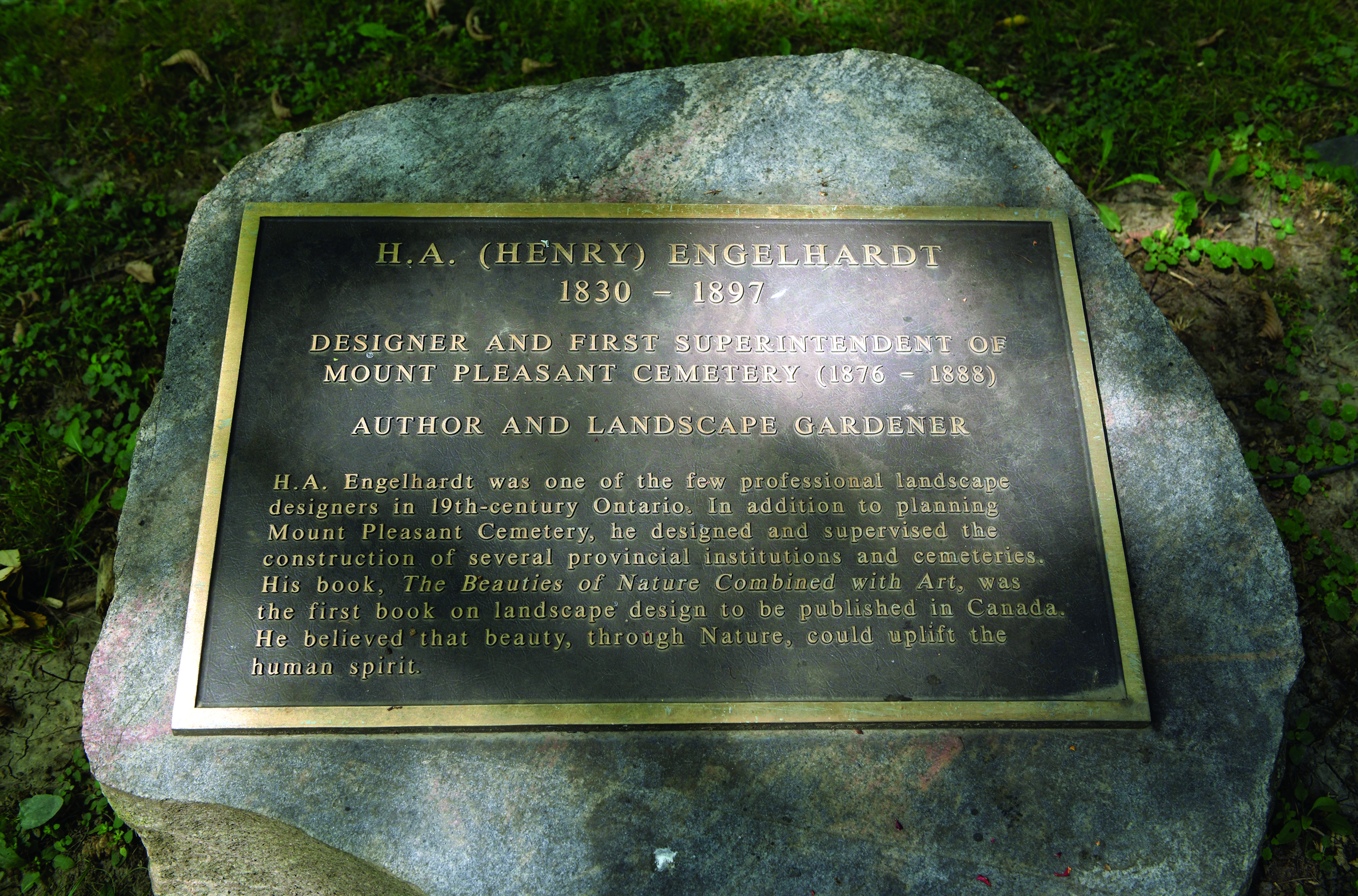 In 1851, a 21-year-old Prussian immigrant stepped off the docks at Baltimore Harbor and began a career that would transform parks and cemeteries across North America. His name was Johann Heinrich Engelhardt, though he  would later change it to Henry Adolph Englehardt after his father. H.A. for short.

H.A. Engelhardt’s life’s work would culminate with the design and creation of the Mount Pleasant Cemetery, and his continuing influence on our own work can be felt today.

A civil engineer by training, Engelhardt’s talent lay in landscape architecture, the art and science of designing outdoor spaces for practical use, aesthetic beauty, and environmental sustainability. As a young architect, he contributed to the design of New York’s Central Park, and spent years in North Carolina and Virginia before immigrating to Canada in 1870.

His reputation was such that in a letter to the Belleville Intelligencer in 1872, the author “Cranky” bemoans the city’s sloppy approach to tree-planting at the courthouse, sarcastically wondering why they did not “Engage Engelhardt or some other equally talented landscape gardener — Nonsense, what more could he do? What does he know more than the ‘twenty-five-cent tree councillor’?”

Perhaps accountable for this fame, Engelhardt’s 1872 book, The Beauties of Nature Combined with Art, laid out his vision for what a cemetery can be:

“Well may that city or town be proud, that can boast such a ‘city of the dead.’ Strangers visit such places with interest, while relatives and friends are led to higher and nobler aspirations, as they meditate amidst such places of solemn and yet graceful attractions…”

To Engelhardt, cemeteries should be open places, free from the low metal fences common to British cemeteries of his day that “marred the harmonious appearance.” Any changes to the landscape “should agree and conform to the natural features of the place.” These perspectives continue to guide our approach to design, though we don’t always agree with his assessment that monuments risk giving a cemetery “the appearance of a marble yard.”

In 1874, the Toronto General Burying Grounds Trust engaged Engelhardt to design a cemetery that would sit at Yonge Street and St. Clair Avenue. So pleased were they with his work that in 1875 he was offered the position of the new Mount Pleasant Cemetery’s first Superintendent, which he held until 1888.

Engelhardt transformed the rough land, once called a “thistle farm,” laying out curved, sweeping roadways, ordering trees from nurseries across the country, and even damming a creek to create a series of small lakes. While the latter were filled by earth from the excavation of the nearby subway in the 1950s, nearly every element was designed to stand the test of eternity.

The principles that guide his work still hold true: create a place around which a city and its neighbourhoods can grow, designed for beauty while in tune with nature, and made for both those who visit and those laid to rest. Simple and enduring.

This article originally appeared in MPG’s Year in Review 2020.

Previous « Heritage at our Heart
Next Toronto Roots, Global Recognition »